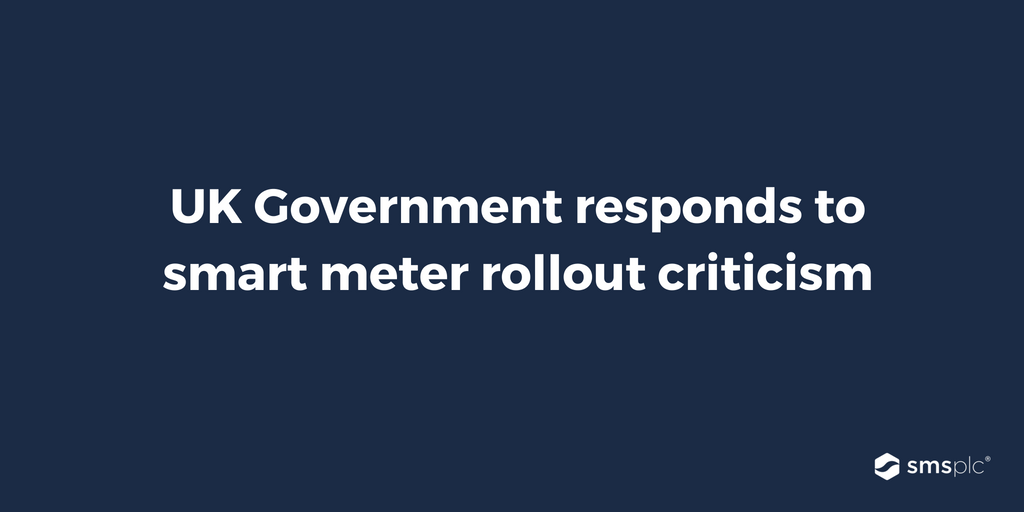 The report, published on 21 July 2018, had highlighted delays to the rollout and claimed consumers with a smart meter installed would make less annual savings than originally expected.

However, in its response the government reaffirmed its commitment of ‘every home and small business being offered a smart meter by end 2020’. It also outlined the numerous benefits of smart meters to consumers, including their cost-saving advantages, as well as dispelling some of the common misconceptions about the technology.

The government’s response echoes that of Smart Energy GB, who in a separate statement reiterated that smart meters are being installed across Great Britain to not only help consumers cut down on their energy usage, but also as part of a crucial national upgrade to the British energy system.

“The smart meter rollout is a vital investment for Great Britain, leading to savings that will outweigh the costs by billions of pounds,” said Robert Cheesewright, Director of Policy and Communications at Smart Energy GB. “The Government and Ofgem have been clear that they expect energy suppliers to pass these savings on to customers.”

As part of the government’s Smart Meter Implementation Programme, UK energy suppliers have been tasked to fit approximately 53 million new smart meters by the end of 2020 to homes and small businesses around Britain. Smart meters are set to put an end to estimated billing, giving people a greater understanding of their energy use through the provision of accurate consumption information, and therefore helping consumers change the way they use energy in order to reduce bills.

Despite reports to the contrary, Smart Energy GB also emphasised that smart meters do not stop you switching suppliers, pointing to evidence that people with smart meters are more likely to have switched suppliers or tariffs in the last 12 months than those who don’t have them.

“Any suggestion that smart meters create barriers to switching and leave consumers captive with their energy supplier are not supported by official Ofgem data,” the smart meter campaigner pointed out. “The simple fact is that 23% of those with a smart meter switched their supplier in 2017, compared with just 17% of consumers who were still using analogue meters.”

This is an area that SMS Plc is currently directly involved in developing as it continues to host a metering test lab for the Data Communications Company – the organisation mandated to manage the UK’s smart meter data and communications system. Testing at the lab in Cardiff aims to ensure that any original SMETs1 smart meters maintain full functionality when adopted and enrolled into the new SMETs2 data network. You can read more about this testing here.

In responding to criticism of the rollout, Smart Energy GB also posed what the unfavourable alternative to smart meters would mean for our energy system, and for consumers.

“The alternative to smart meters is an expensive, outdated system where we waste billions of pounds needlessly generating dirty energy, with customers facing the uncertainty of estimated bill,” it stated.

Instead, aside from the benefits that smart meters already offer consumers, in the future we will be able to link smart meters with other smart household devices to help further reduce bills. For example, a smart washing machine will be able to automatically run at the cheapest time of the day, directed by information coming through a smart meter.

This two-way communication between consumers and the energy network will facilitate such ‘real-time’ automated responses to changing demand, enabling demand-side response schemes that allow consumers to control when they use, store or export their energy (potentially monetising their usage).

We are already seeing energy suppliers introduce time-of-use tariffs which will be key to enabling the full realisation of these benefits.

What are the benefits of smart meters?*

• smart meters put consumers in control of their energy use, so they can save money on their bills – those savings will be worth more than £1.2 billion a year by 2030
• they provide easier, accurate billing and will help consumers choose the best deal for them
• no more estimated billing – something we only seem to tolerate in utilities – no more having to crawl under the stairs or to take time out of your day to provide manual readings to your supplier
• smart meters are set to be the cornerstone of the smart energy system of the future, potentially saving Great Britain up to £40 billion between now and 2050

What do energy consumers who already have smart meters think?*

To read the government’s full response, including its dispelling of smart meter ‘myths’, click here.

For more information on the smart meter rollout and its benefits, visit Smart Energy GB.